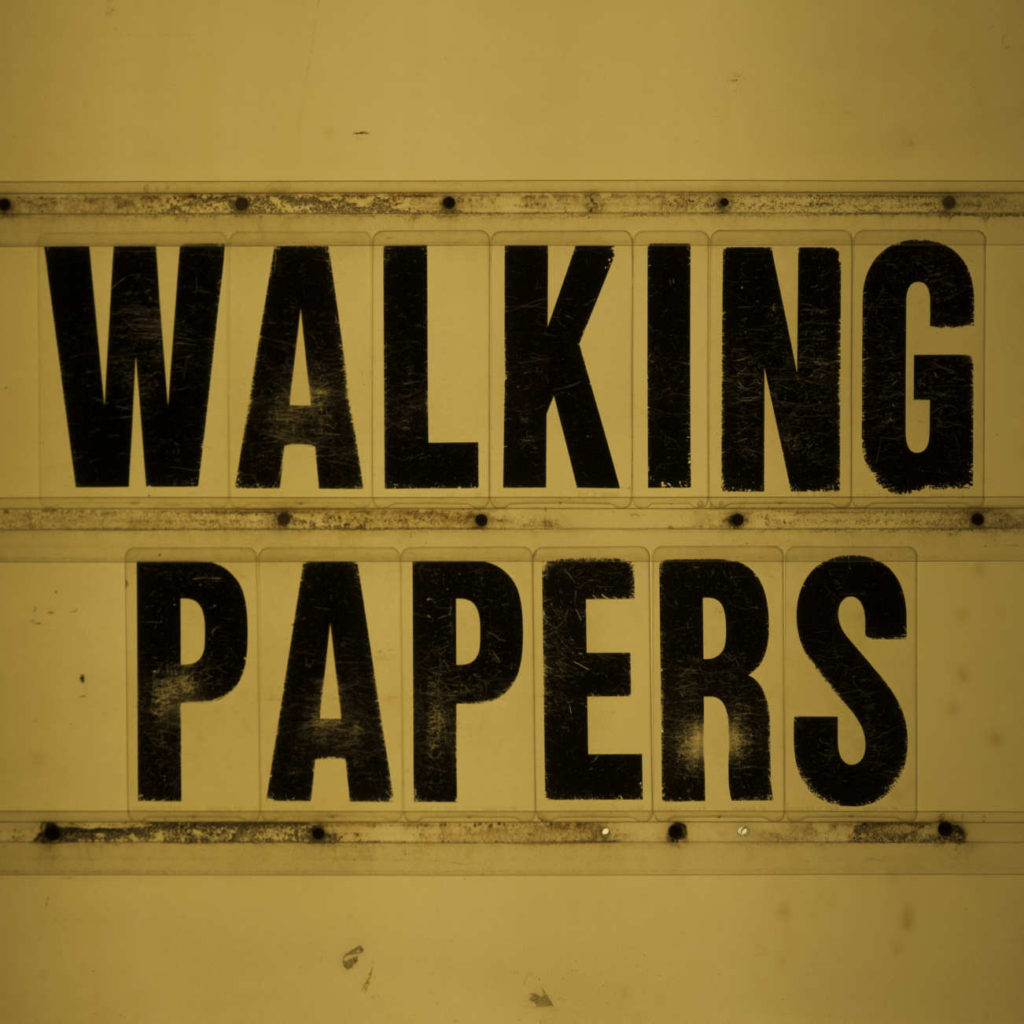 Walking Papers |  Jeff Angell (ex-Post Stardom Depression, ex-Missionary Position, Staticland) guitarist and front man founded the band with Barrett Martin drummer (Screaming Trees, Mad Season, Skin Yard, Tuatara) in 2012. Jeff’s old friend and comrade Benjamin Anderson keyboardist joined shortly thereafter. They called in Duff McKagan, the Guns N’ Roses bass guitarist to play on their first album they were recording at the time who later went on to become a full-fledged and permanent member of the band. The first Walking Papers album was released in 2013 and besides the previously mentioned musicians, Mike McCready the guitarist from Pearl Jam was also a guest musician on the first album (as well as playing several gigs with the band including a guest appearance at the Moore Theater filmed live). Jerry Cantrell joined the band four years ago so that they could play Two Tickets and a Room at a concert at the Crocodile Café from the first album. The band also played in Hungary on June 14th, 2014 thanks to a spontaneous idea the band had after they decided to play on a so-called rest day. The Debrecen concert is still considered a legendary one to those lucky, and not so lucky, local Seattle fans.

Right in Front of Me

I am listening to the new Walking Papers album and have started writing this first sentence over and over again. I played the closing track, Right in Front of Me, many times in the last hour in a half. The 7 and half minute song seems to end in just a few seconds but I can hardly wait for it to start again. Duff McKagan’s soft bass accords will play again soon.

“It’s time to drop the anchor. The storm is closing in. I can see it in the clouds. I can smell it on the wind.”

The sound of Jeff Angell’s raw voice slowly floats down to find Ben Anderson’s keyboard’s soft and charming blanket of sand. The song is chock-full of ocean metaphors without any musical allusions. All of the instruments are in complete harmony to each and every waver of Jeff’s voice. The song itself has such an intimate quality that it’s hard to put into simple words. I can’t remember the last time I heard anything as beautiful.

The aesthetic quality of this album is something one hardly experiences these days in the arts, whether in paintings, sculptures, poetry or film. The music seems to be in some kind of harmony with the thoughts which have been woven into some symbiotic relationship with its audience without any sign of a kink whatsoever, an implicit natural constituent. One cannot live without the other. If they are lucky, they will benefit one another, if nothing their senses will not be able to compete with any other. It is as if neither the ear, nor the brain, can decide which is the case. Some of the songs exist as you experience them. You perceive them from deep down somewhere.

Right in Front of Me is exactly like that. Mark Lanegan’s One Way Street comes to mind all of a sudden. As does Crown of Thorns by Mother Love Bone. Or Rowing on King Animal by Soundgarden. Walking Papers has created something so outstanding, something that exceptional, with this song. But let’s not get stuck here; let’s see what the entire WP2, the Walking Papers sophomore album sounds like!

Jeff Angell on Grungery, about WP2 | “We have a full finished album with 17 songs. I’d like it to come out ’cause I like the songs but right now I can’t do it. I can’t put out a record that competes with the Staticland record. Probably the closest thing that I’ve ever made to a solo record was the first Walking Papers record. A lot of those songs were my songs before I even knew Barrett. We practiced 6 times and we made that record. A lot of the songs are songs that I had but didn’t use on the Missionary Position record. At the time I just thought the other songs were better. So I had these leftover songs and we made up a few, kind of jamming. The second Papers record was really the record that sounds like Ben, Barrett, Duff and me. We wrote more of those songs together. The first Walking Papers record is definitely closer to a solo album than Staticland. Staticland is more the three of us working together. Walking Papers was mostly my songs with Barrett playing along then Duff added his bass later. But the second Walking Papers record the one that no one’s heard is more of a Walking Papers record. I would like people to hear it because I think Barrett and Duff add an amazing rhythm section and it’s an album that’s not like any other album I’ve made because of their influence on it. The album was partly recorded at Josh Homme’s [Queens of the Stone Age] studio but I recorded my voice and the guitar at home.” (November 2016, Seattle – read the entire interview here).

There are thirteen amazing songs and a certain noticeable difference on the second album’s material. The album zealously starts out with Duff’s distorted bass on My Luck Pushed Back (What a title!) and Death on the Lips as the second tune. Aside from Duff’s grooves, the rugged features of Ben Anderson’s Hammond appear. Jeff’s voice determines the general ambience of the album, in other words, the characteristic melody only accountable to him, the rich emotion and style of expression, Jim Morrison-like psychedelic, as well as the dark Ian Astbury-like lines, which appear in every single element.

In spite of the fact that Jeff wrote all the songs, it is impossible not to notice the musical contributions all the others put into the album. The songs on the second album WP2 are as different as could be considering Ben, Duff and Barrett took part in the songwriting process this time around. It is interesting to pay attention to Barrett Martin’s Mad Season-like energetic, tam drum effect in Somebody Else and Yours Completely. The troubled pulse of November Hotel come to mind in both cases. Barrett displays his creative diversity in Before You Arrived and then Ben Anderson’s performance becomes that much more resolute. The sound of the keyboard is explicitly Northern European and gives onto the dark rock-like mood of the refrain. Yours Completely and Death on the Lips could have even been released on the Staticland album.

Ben’s keyboards also dominate on Don’t Owe Me Nothin’ aside from Red & White and Right in Front of Me as the album’s third slowest song. There is a Mark Lanegan-like quality to it but it could also have been taken from a score of the latest Twin Peaks episode. It’s a song that belongs in the Roadhouse movie, a beautiful song!

As mentioned in the interview excerpt above, Jeff said that the WP2 material was ready years ago but was just waiting to be released. Just to show how true that is, the band played Red & White as well as King Hooker back in 2014 at the Debrecen concert. The former being the Walking Paper’s most sentimental and moving song while the latter possesses a slight ZZ Top – like riff due to the slide guitar at the beginning of the song along with its lifting foot cymbal rhythm and is certainly to be one of WP2’s most well received songs to many.

Hard to Look Away is elevated due to Barrett’s fundamental drum performance and Duff’s playful bass line and beginning riffs. Ben’s keyboards are almost uncalled for under the sound of the bass. The guitar solos are classic just as in Into the Truth, if only they were both a bit longer!

If there was anything to pick bones about in WP2 that would perhaps have to be the quantity and length of the guitar solos on the album. The truth is I would have listened to more of them on the Staticland album as well. If someone is as talented a guitar player as Jeff is then it’s just a crime to keep that to themselves. Unless, of course, he is just like, “the truth is I just get sick of listening to myself play sometimes.” Then, all we get is a glimpse of hope that he changes his mind one day. Until then, we have to savor one or two of Jeff’s harder riffs (such as in Hard to Look Away, This is How it Ends-apart from solos again).

I Know You Are Lying seems like a rudimentary hit but with impressive guitar themes in the first half of the song. How could a song like this be placed as the tenth song on the album, though?!

The Recordings | The Walking Papers’ musicians recorded the album in four different places. Some parts were recorded at Josh Homme’s (ex-Kyuss, Queens of the Stone Age, EODM), the Pink Duck Studios, in Burbank, California but they worked on WP2 in Seattle at grunge legend Jack Endino’s Soundhouse as well. They also worked at Jupiter Studios with Martin Feveyear – all the members of Walking Papers had worked with him in the past. Martin’s name is associated with many albums such I’ll Take Care of You and Field Songs (Mark Lanegan), Grasshopper’s Dream (Gary Lee Conner), Since We’ve Become Translucent (Mudhoney), Ordinary Miracles (Post Stardom Depression), as well as Dark Days and Sick (Duff McKagan’s Loaded). Aside from Pink Duck, Soundhouse and Jupiter Studios, the band also recorded some material by Ben Anderson at BKB Studio. WP2 mastered by Chris Hanzsek at Hanzsek Audio, Seattle. Yes, you remember well. Chris Hanzsek was the co-founder of  C/Z Records which released the legendary Deep Six LP, a compilation album featuring early recordings from extremely talented local bands like Malfunkshun, Soundgarden, Green River, Melvins, The U-Men and Skin Yard. One of the first moments of Seattle music scene which later came to be known as grunge.

Sometimes after listening to an album just once you can get a feeling that there is something truly special about it. When you are not afraid to put aside all of your pre-existing expectations and are still blown away by it. That is exactly what the Walking Papers’ second album is like. It is the bluesy, psychedelic, sometimes dark, grunge-like, intelligent rock album of four completely amazing musicians. You need peace and quiet for this one, a record player and some earphones. Maybe even a good bottle of wine.

Jeff Angell has become one of the most important songwriters and performers of our time right in front of our eyes. He has his own unique style and it is difficult to compare him to anyone else, which is a difficult thing to accomplish in today’s homogenous infested music world. Jeff has created some outstanding work with Post Stardom Depression, a Missionary Position and Staticland – the last two Walking Papers albums fit in this list just perfectly.

We are expecting some new albums from Pearl Jam and Alice in Chains in 2018. No matter how good those albums are going to be, we can place WP2 up there next to those already. This album has secured its place on my toplist this year. WP2, but especially Right in Front of Me and Don’t Owe Me Nothin’, will be my loyal companion for decades to come.

It’s time to drop the anchor.

“There was a paper he wrote. His last paper in high school. His teacher loved him anyway and gave him… …

Chris Cornell’s first solo record, Euphoria Morning turns twenty this year. The
“I just want to put them out individually, on 180 gram vinyl,
Chris Hanzsek, sound engineer, record producer, founder of C/Z Records and Reciprocal
“We all grew up listening to Led Zeppelin and Black Sabbath, all that stuff.
“If you were looking to find my songs, Walking Papers has an
A LAP TETEJÉRE

A Use Your Illusion turnét követő években a Guns N’